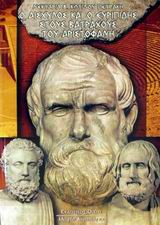 
Of all the artistic failures
that have nothing to do
with either laws...
or the Muses...
pay attention to the main one...

Protect your heads
from Greece`s moan that was enclosed
inside your masks.

The role you undertook to play
does not strike anyone.

It itself is struck powerfully
by the irresistible aspiration of the Dialectic
to overwhelm the Human Being
with second opinions
in a second head
in order to interpret in keeping with its preferences
all that will take place in the space of the World.


Independently of what went on in your brains
which were subservient
just like the territory of the Empires
the protest of the soul
was not heard by anyone
because logic...
had been completely excluded.

It had been completely excluded...
and here it`s Greece`s fault as it ceded
to Dionysos...
extents of Earth and soul...
for his light-hearted and silly games
and the Heavenly places which had never been touched
by the hands of tragedy
were invited onto the stage
to play sub-songs for amusement.


On the stairs...
you`d think the conscience of the World was territorial
applause broke out
and the Nightmares who even the night considered too dangerous
to be included in its darkness
confirmed that they had earned the right
to walk unmolested with Happiness
in the flow of Days.


If at times you erred
and shifted the hero from mask to brain
because of this collective authenticity
you will sustain heavy artistic blows.

Ah, here yes...
you found Olympus on its own Time!

Precisely when they lighted a few
superstitious fires on it
and who knows what other long road
it will burden Greece with again.

And on the return... the tired field-marshals
when they find themselves at the Mercy of Seas

and no hand will be stretched out to them
from Olympus to pull them back to solid Earth
and they will curse the Tragedy as inhuman and evil.

Spontaneously then...
plunge to the lower feelings of Earth
which warned you that
soon they will be looking straight into Nightmares` eyes.


Or so that we may be more like Humanists about the World
a kind of incomparable Fog
that will block visions this way and that
like a black sheet
for the mourning for Persephone.


That is why it`s also feared this make-believe Humanist
will take us by the throat
and dressed in white
will go into Athens
in order to hide the evil Hour
which roams the World like a paralytic
to acquire the right to be History.


That is why actors if you desire
that your temporary presence on Earth
is not the cause of misunderstanding
regarding Humanity`s being dressed
in the white garments of Humanism
it would be better if you had the conviction this World
has a skinny body... and its lines not suited
to that outfit
so that when the Future reveals
the failure of Philosophy
and the vanity of all things
perhaps the conscience of the World will also be upset
by the mistake that was shown to be so small
and enveloped its spacious heart
leaving Tragedy out.


And indeed now when Greek Horizons are clear
it is suspected that from the East
this same darkness and same cyclone
will rush in with mania slyly slipping past
the Symplegades
and will demolish the Visions of the World
with the eternal and heretical slogan:
"Beware Bad Art and Athens.''