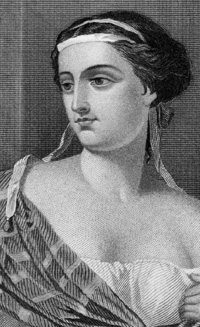 The presumptive lovers are in Ithaca
I don't know where the true lover is.

To climb the olive trees
perchance to see the true wreath somewhere.

The olive trees are ageless on Ithaca
and like the glory of this island
do not dream of height
nor fear death.


In short
in regard to immortality they are serene
the pleasure their gigantic trunks will feel
besieged by the desire
to become a presumptive bed.

To climb the waves of the sea
perchance to take me to the true wreath.

I fear the low spiritual level
of the world's seas
which will drag little Ithaca
along the Earth...
which never would accept becoming sea
and raising envy like a threatening mast
with the blessings of Poseidon
for good luck and a good time on Ithaca
they become a presumptive wreath.


In order to turn my face from the sky
and pray for the true lover.

The sky was born on Ithaca
it was utterly debased the moment it left there
and enraged by the devotion
I show for Odysseus
along with a whole raft of cynics and petty souls
which rules the roost up there
for this brilliant Virtue of ordinary mortals
will be blinded by the foggy hate.
of becoming a presumptive bed.


To spread my arms to the horizons
perhaps at some point to touch the true wreath.


The sleeping leaders
who are not bothered by the black omens of Troy.

They will awake from the delicate hands
of a Beautiful Woman
cursing sleep and dreams
which have almost deprived them of being
what else..? .. And the ugly old men
are looking forward to a sex party.

In order to wait for a warm Mediterranean wind
that will perhaps show me the course Odysseus ` ship
has taken.

All the winds are cold
and lead exclusively to Troy.

They will hurl you there as well
if you keep company with faithless beauty
which put a wreath on the world's brow
demonic and calamitous
and then the world would suffer once again
because all Troy
will take breath from the ashes of destruction
act coarsely
and seize virgins.

I consider then to be the most serious
and dangerous suitors
who will continue to lay claim to me
like the dirty men
who turned their back on Troy in flames
because they were more enchanted
by the winds of the loneliness of a single woman
and then scattered by an unconscious horizon
have then nullified the conscience of the world
in order to carry out these wretched feats...

But when you get down to it
to carry on the scandal myself as well
so they won't take me for a nothing
I would like to say straight from the shoulder
that these suitors who have colonized Ithaca
as the seas have done to the of Odysseus
have such weak male faces
it's as if they've been washed off
completely expressionless that is
as pale as dust..

And they cannot face
the femininity of Penelope.