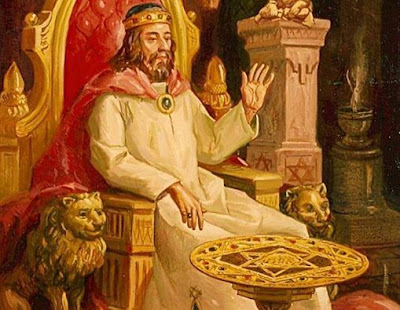 
The women who King Solomon loved
the most
were those women
whose soul heed imagined
like the rivers flow.


But immediately after
this ardent desire
old Solomon coolly concluded
that the rivers flow leads them to the sea
and to that boundless blue of the oceans
where all the Temples and Sins
of the Earth are devitalized
and he might thus lose the control he had over Women.


Then King Solomon
in a fit of anger remembered that he was in command
and in the case of danger
he would know how to stop
these maddened rivers.


But this was not the only danger...
Besides the seas and the rivers
the female view of the cosmos also included the sky...


Indeed of late
he had information from his secret agents
that women were exchanging looks with the Stars
and...consequently
their hearts which he had assumed
were near at hand and under complete possession
like the walls of palaces
burned as one with those distant fires.

And thus in that way
King Solomon began to repent
because before he created his Kingdom
he had not thought of incorporating all the Stars
in the celestial territory of the Monarchy
and now at this advanced age
he had to do a detailed study of Astrology.


But old Solomon
had discovered a long time ago all on his own
that Heaven and the Mysteries of the Heaven
were like women
whom he had never loved.