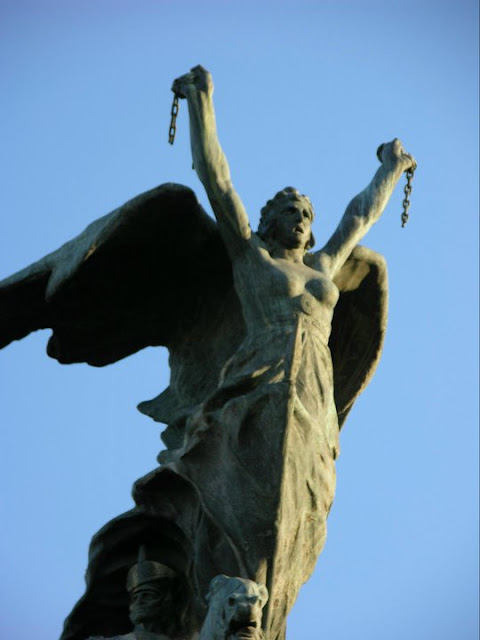 As I did my tour of the World
there was this island on the other side of the Caribbean current
that when it saw all the travelers
without any gift
for great discoveries
it did not suffer any geographical reformation
but in a completely schematic sense
reminded me of Ithaca...
The Island was far enough away
to make me doubt for yet one more time
Penelope’s devotion...
that she may have once more dishonored Greece
philandering with those defeated at Troy
and amplifying their Fantasy
that they were vanquishing her body...
what I’m saying is the Greek army would have failed
in demeaning her Happiness
which might have brought down the Soul of Greece.
(And just so you know...
If something like that should
happen...then the Eternal Man
that Philosophy dreamed of in Athens
can be forgotten once and for all...)
Despite all that at such moments
it is not worth wasting Divine Breath
on such insignificant things
because that was the period on Olympus
where a disillusionment without precedent was perpetuated
regarding the failure of Universal Reason


when Women were found in its Essence.

And now when I see the Palms on the Island swaying
I remember the Islands of Greece
and when we set out for Troy
how simple-minded we were not understanding
that punishing mercilessly those desires
which endowed the youth of Troy with such brilliance
with those narrow visions and parochialism's of ours
we came up with a good recipe
for heartache and Universal Catastrophe.


And asking forgiveness for that Fire
I see behind the backs of the Caribbean
Continent
with a turbulent present of frightened people...
and whether it comes into the World or not
all the currents of Human Thought will be drowned
in dispute...
and finally when they want to leave
a dignified inscription
on the tombs of the drowned
the autonomy of Continent will be defamed.


I in particular would be repudiated
I would become anathema for all lives
and the fact that immediately after the destruction of Troy
I was sent by the Greeks
in quest of New and Virgin lands...
then when the World had a growing suspicion
that the only work that went well
with this People
was plundering.

Much later other travelers would come
loaded down with Ghosts
and Mythological notebooks...
in which would be written that there never had been
a brilliant period of superstition
and as soon as they set foot on the Island
the minute these Wise Elders
attacked Continent ...
they would confirm that their thoughts had come to an end
having squandered them on overcoming currents.


Continent
would be taken aback by this misfortune
and would go against the Thinkers
and indeed quite often... would beseech God
to lay waste to the islands.


Someone in any case would lose
and while I have a presentiment even now
about this terrible defeat
I would like to issue a warning
to Apollo...
that the Ancient Mythologies
will no longer have a role to play.


So because of that...
when we met on the Island
and saw that as soon as the masts
on the ship fell...
the masts of the Ghosts were raised
we then observed a moment of silence
commemorating the drowning of Aristotle in the currents
of the Euripus
which had not yet occurred....